A time-limited special event is here! Clear the event daily to collect Awakening Medals and aim for LR!View Event

7/6 (Sat) 16:00 ~ 8/12 (Mon) 15:59 PST
* Caution: Event Times in Dokkan Battle are listed in Pacific Standard Time (PST) instead of Pacific Daylight Time (PDT).
A special event to celebrate the 4th Anniversary is now on!
Clear the event every day and Dokkan Awaken Pan (GT) (Honey) into LR [Wings Spread Out to the Cosmos] Pan (GT) (Honey), who possesses an "Active Skill"!

* This event is different from the usual "Pan's Secret Adventure" and won't give out massive Rank EXP.
* Damage dealt on the event boss Pan (GT) (Honey) is limited. Seems like taking her down is not an easy task! 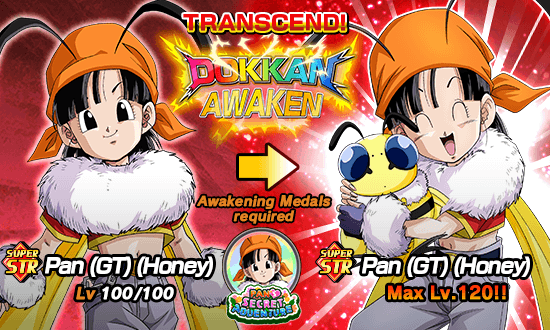 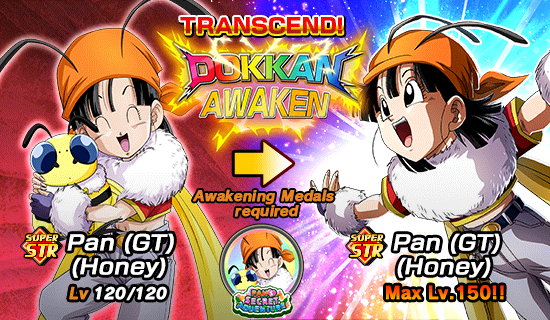 [Wings Spread Out to the Cosmos] Pan (GT) (Honey)'s Active Skill can be activated just once starting from the 3rd turn from the start of battle!
In addition, the character's voice will start playing and the BGM will also change upon launching her Active Skill! Once conditions are met, seize the chance to activate her skill!

One Dragon Stone will be rewarded for clearing Stage 1 on HARD. (1 Dragon Stone is available in total.)
* Obtaining Dragon Stone as a clear reward can only be done once.
* This event will reset daily at 16:00 PST.
* Please note that failing to clear the stage or selecting "Abandon Quest" will also be counted as one attempt. If you have used up your attempt limit, you won't be able to challenge the event again until the daily reset.
* Please note that the event content and dates are subject to change without prior warning.
We hope you continue to enjoy playing Dragon Ball Z Dokkan Battle!
PayPal Donation Donate Bitcoin