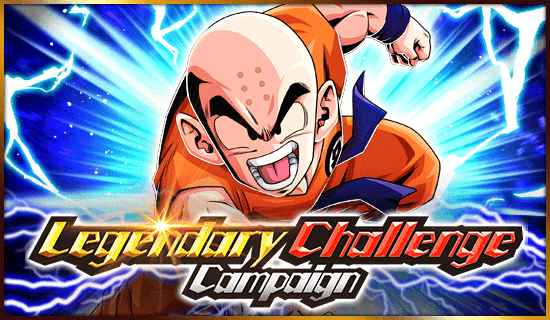 Legendary Challenge Campaign will start at 16:00 PST on 4/1 (Thu)!
Take Krillin to the LR realm through this Legendary Challenge Campaign!
Level up his Super Attack to Lv. 20 and fully activate his Hidden Potential during the event period to get awesome mission rewards!
On top of that, those who have recruited LR [Raging Killer Move] Krillin to their team before 15:59 PST on 4/1 (Thu) will receive mission rewards including 10 Dragon Stones!

The mission for the special rewards available during: 3/25 (Thu) 22:30 ~ 4/1 (Thu) 15:59 PST
List of rewards: - Dragon Stone x10 - [Mysterious Ritual] Elder Kai x3 - Incredible Hourglass x2
* The mission for the special rewards can be completed by recruiting [Raging Killer Move] Krillin to your team during the above period. If you have already Dokkan Awakened the character into LR [Raging Killer Move] Krillin but the character is currently in the reversed state, you can complete the mission by Reverse Dokkan Awakening the character.
* Please go to the "Special Missions" page for more information about the mission.
In addition, starting from 16:00 PST on 4/1 (Thu), the chance of obtaining bonus rewards from the boss battle in the Prime Battle Event "All-Out Earthling Warrior" will increase if there are "Inhuman Deeds" Category characters on your team!
Get prepared for this upcoming campaign!

Please note the Prime Battle Event "All-Out Earthling Warrior" will be temporarily unavailable during the following period due to preparations for the Legendary Challenge Campaign.
- Preparation Period 3/30 (Tue) ~ 4/1 (Thu) 15:59 PST
* Caution: Event Times in Dokkan Battle are listed in Pacific Standard Time (PST) instead of Pacific Daylight Time (PDT).
* Please note that the event content and dates are subject to change without prior warning.
We hope you continue to enjoy playing Dragon Ball Z Dokkan Battle!
PayPal Donation Donate Bitcoin