The new mode "Dokkan of the Dead" will soon be available! Defeat the zombies to restore peace to the city!

The new first-person shooting mode "Dokkan of the Dead" will become available in Dragon Ball Z Dokkan Battle!
Let's take a sneak peek at the tutorial before the new mode is released!
= What Is Dokkan of the Dead? =
The new mode "Dokkan of the Dead" is a first-person shooting game that allows you to engage in battles and explore the city as the protagonist of your choice! You can control characters from the Dragon Ball series to experience this exciting and rhythmic mode!
- Story
Everything can be traced back to an incident in an unknown city...
After receiving a report of violence, the sheriff headed to the city and arrested a man during the investigation, yet there was something strange about the perpetrator... He seemed lifeless... Wait, his heart was not beating at all! It was then that the sheriff realized the reason behind the uneasiness he felt the moment he arrived at the city... The city was surrounded by numerous zombies!
Why did the dead all come back to life...? What on earth was happening?! Before the sheriff was overwhelmed by despair and terror, he made a final effort and called for help through his radio, a distress call made to the defenders of justice who can save this city and the world... 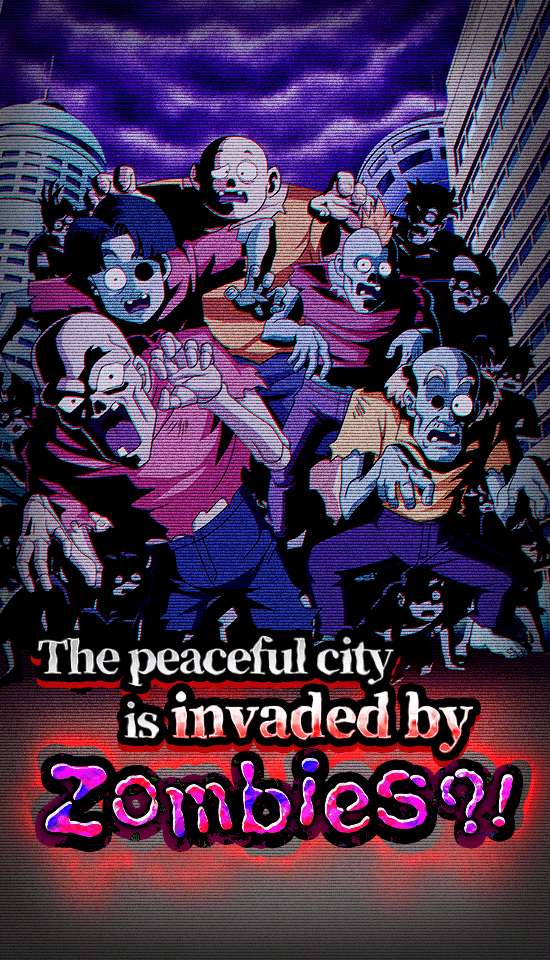 = Select A Character! =
In this mode, you can select a protagonist of your choice from the numerous charismatic characters of the Dragon Ball series!
Character stats and Super Attack differ between characters. "Great Saiyaman", whose abilities are well-balanced, is recommended for beginners! Select "Great Saiyaman" and head towards the scene! 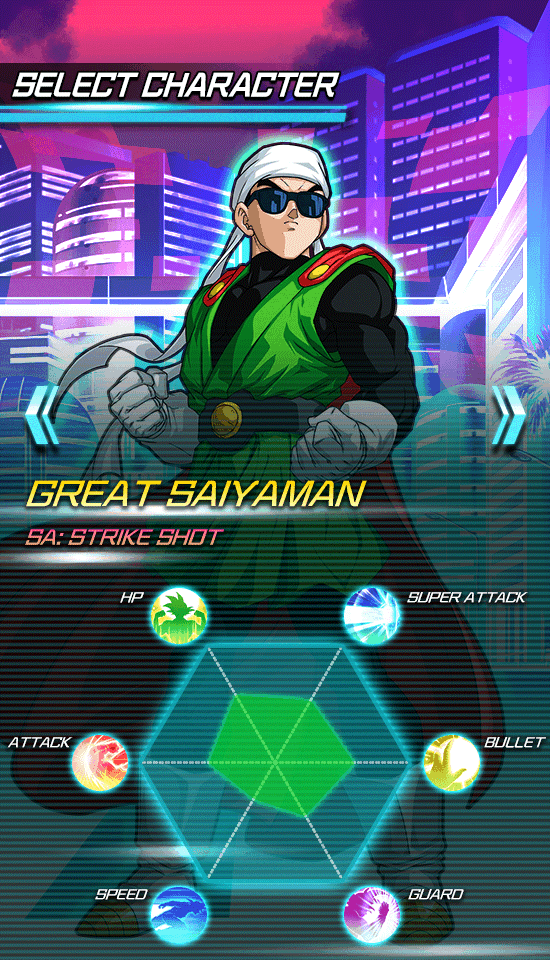 = City In Chaos! =
Oh no! The zombies are wreaking havoc on the city and attacking the residents! We must defeat the zombies and save the city! Now's the time to show them what you've got!
Wait... You don't know how to fight?! That's all right! Videl, a senior defender of justice, is here to help you out! Follow Videl's instructions to learn the basic controls! 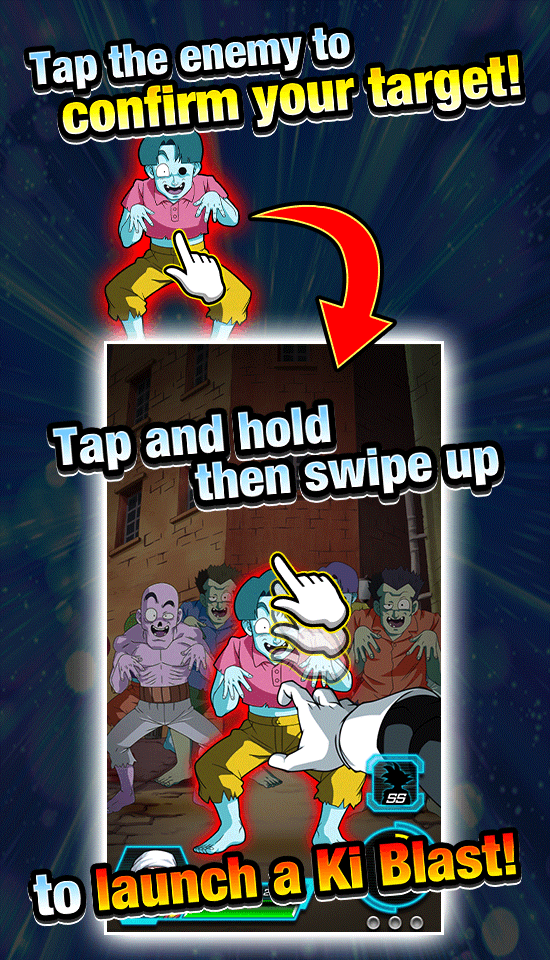 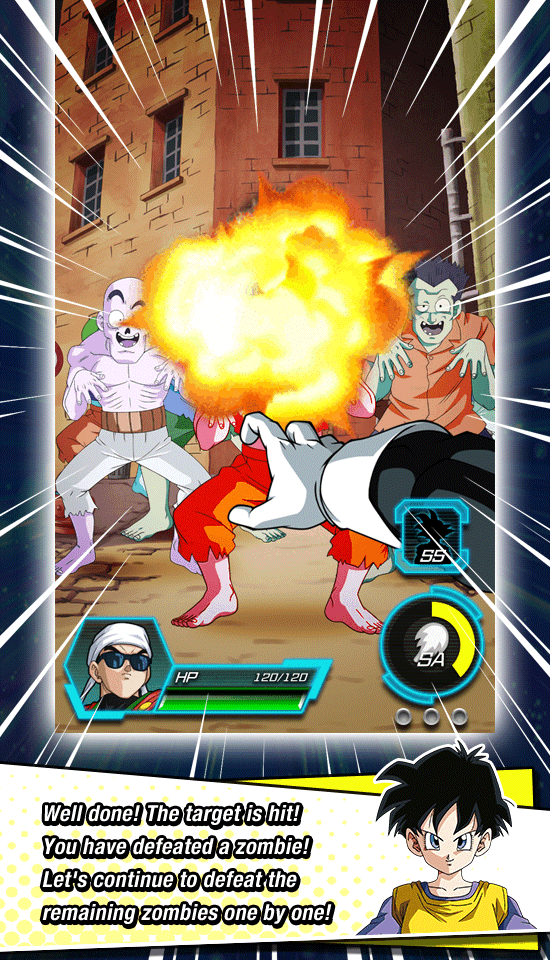 Excellent! You have defeated a zombie! Ki Blast is the most basic technique! Aim to master Ki Blast first!
The number of zombies is still increasing... All we can do right now is defeat the ones that come into sight! Defeat the zombies and investigate the reason behind this mysterious revival of the dead!
Next update: Assault of the Zombies! Clash! A Secret Strategy to Turn the Tide!
* Scheduled to be updated at 19:00 PST. Please stay tuned for the update.
[Updated at 19:00 PST on 3/31 (Wed)]
Watch out! A zombie stronger than the previous ones has appeared! 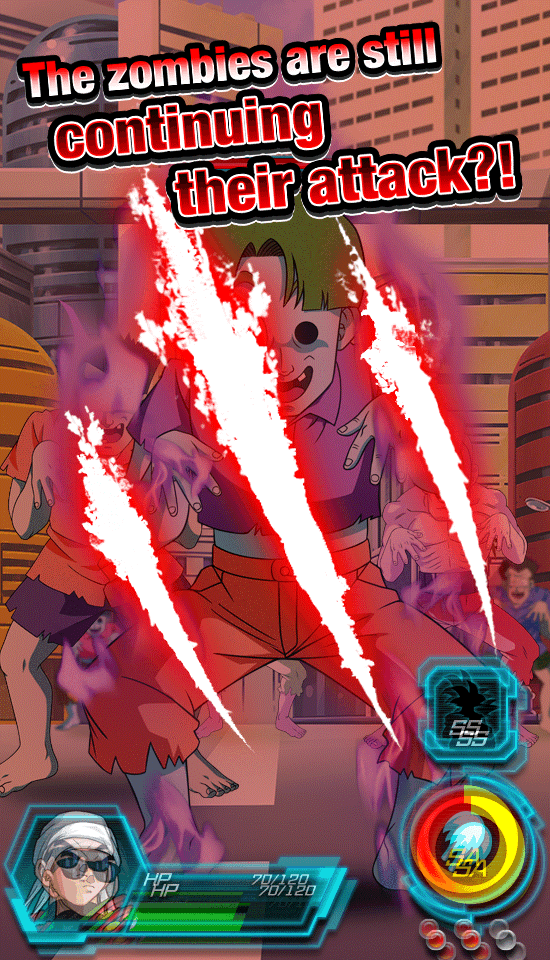 = Pay Attention to Your Remaining HP! =
Your HP will reduce if you're attacked by a zombie or if you trigger traps hidden in the city! You will get a "Game Over" if your HP is reduced to 0! Any mistake made while tackling the zombies can be fatal!
You can consume "Meat Bun" to recover HP! Meat Buns can be found occasionally as you investigate the city. Consume them as soon as you obtain them or else the zombies might snatch them away from you!
= Deal Massive Damage! =
There seem to be even more powerful zombies downtown, Ki Blasts might not work on them...
But we won't back down! Now's the time to... 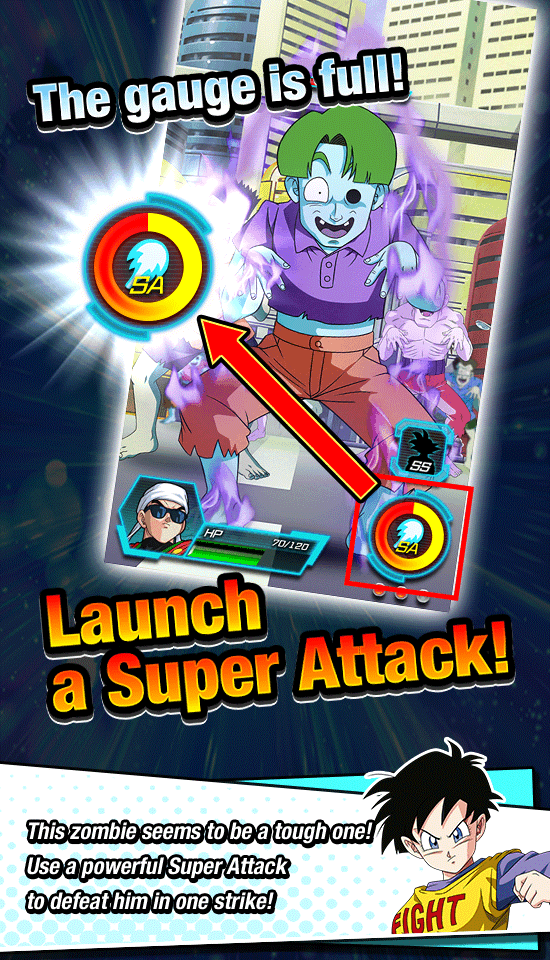 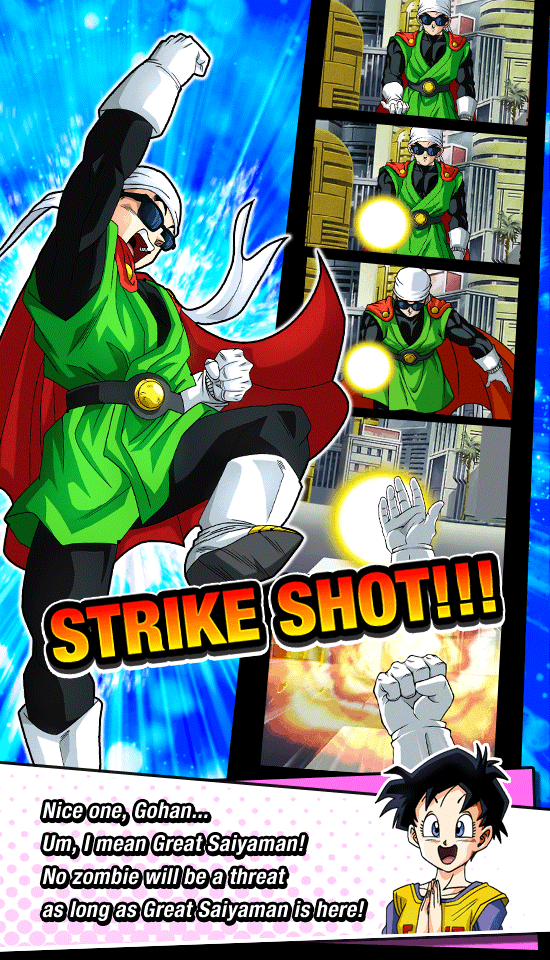 Brilliant! Great Saiyaman has successfully launched his Super Attack Strike Shot! The Super Attack gauge will increase when you attack enemies or receive enemy attacks in battle! A powerful Super Attack can be performed when the gauge is full! Defeating enemies with a magnificent Super Attack is also one of the factors that make this mode interesting!
However, only a limited number of Super Attacks can be stocked, so you cannot launch consecutive Super Attacks! Look for the right timing to launch a powerful Super Attack to gain the advantage in battle!
Next update: Melee! Zombie Army vs. Super Ghost Army?!

A scornful chuckle pierced the silence... Who could this mysterious figure, immersed in pleasure as he observed the city, be?
* Scheduled to be updated at 22:00 PST. Please stay tuned for the update.
[Updated at 22:00 PST on 3/31 (Wed)]
Although Great Saiyaman has defeated numerous zombies with his powerful Super Attack, the zombies are still continuing their attack... To make matters worse, the number of zombies is also increasing! We are outnumbered! An unprecedented crisis is lying ahead! 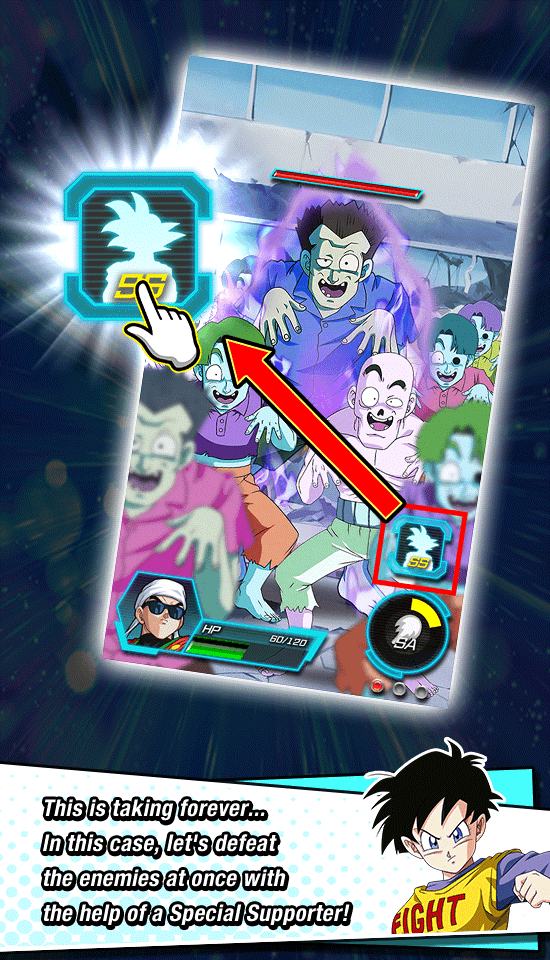 = Overcome the Crisis! =
Tap on the "Special Supporter" button above the Super Attack gauge in the face of crisis! A reliable ally will come to the rescue after you tap the button! Every character possesses a different skill, so select the most suitable character according to the situation! 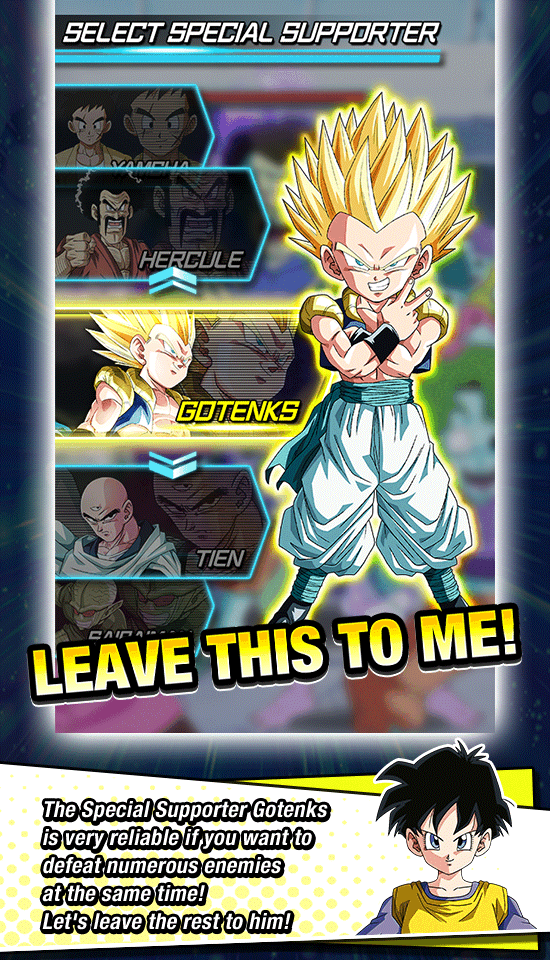 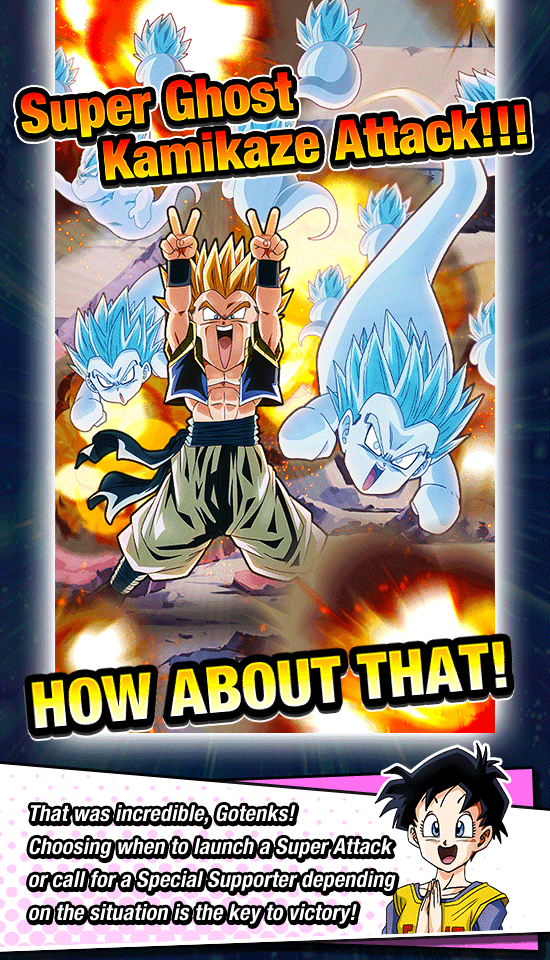 We have overcome the crisis thanks to Gotenks! Calling for a Special Supporter is recommended if you are driven into a corner, such as when your Super Attack gauge is not full or when your remaining HP is low. The Special Supporters will provide support with their special power!
Now you should be familiar with the basic controls! Continue to defeat zombies and restore peace to the world!

Hm?! This piercing gaze... The mysterious figure who watched as Great Saiyaman defeated the zombies one by one... who could he be?
Next update: True Evil! The Resurrected Emperor!
* Scheduled to be updated at 01:00 PST. Please stay tuned for the update.
[Updated at 01:00 PST on 4/1 (Thu)] 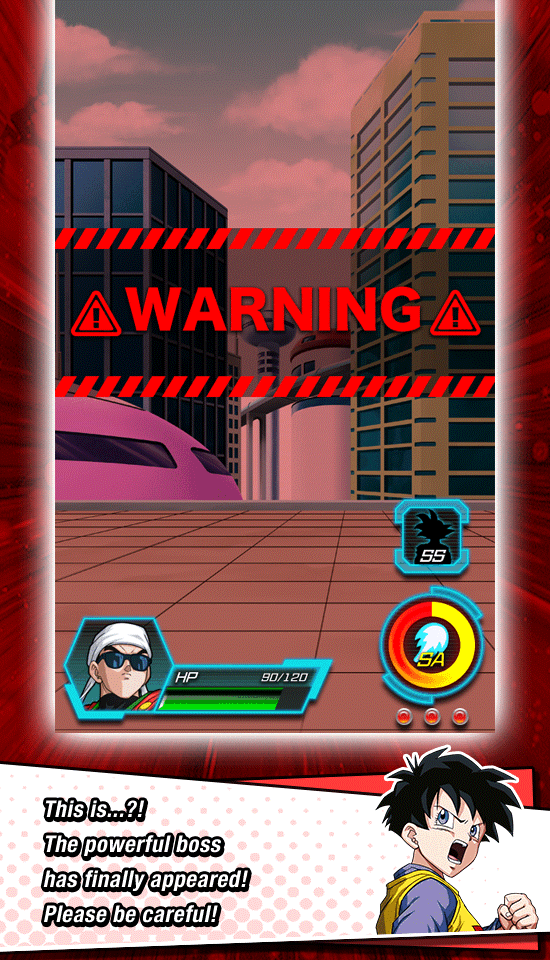 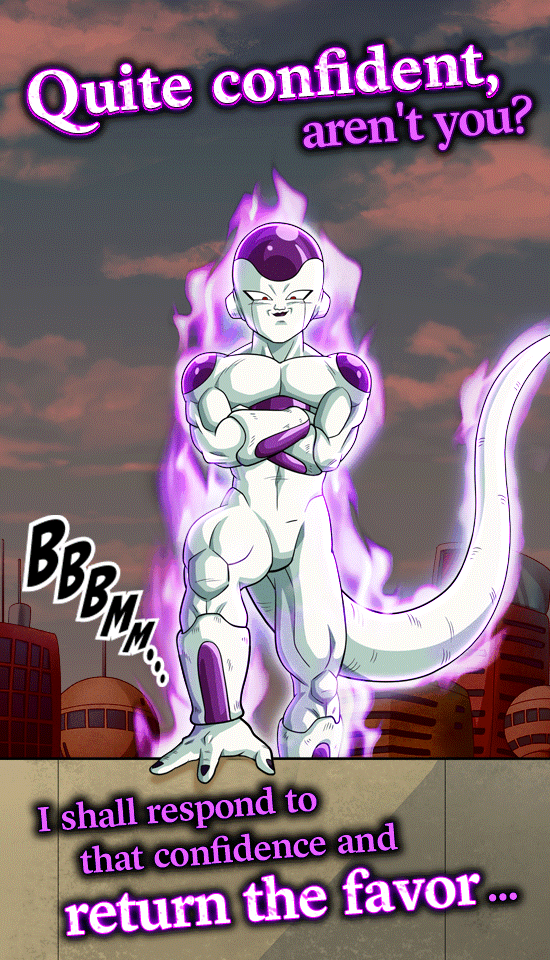 Even Frieza has been resurrected?! The evil emperor's power far exceeds that of the zombies we have defeated! Follow Videl's instructions carefully and take on Frieza with the techniques you have learned so far and the battle experience you have gained! 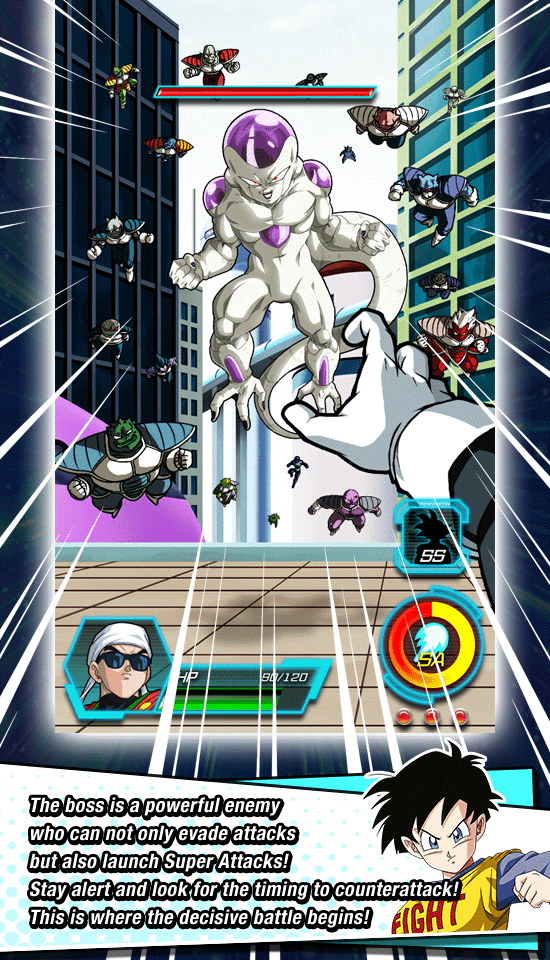 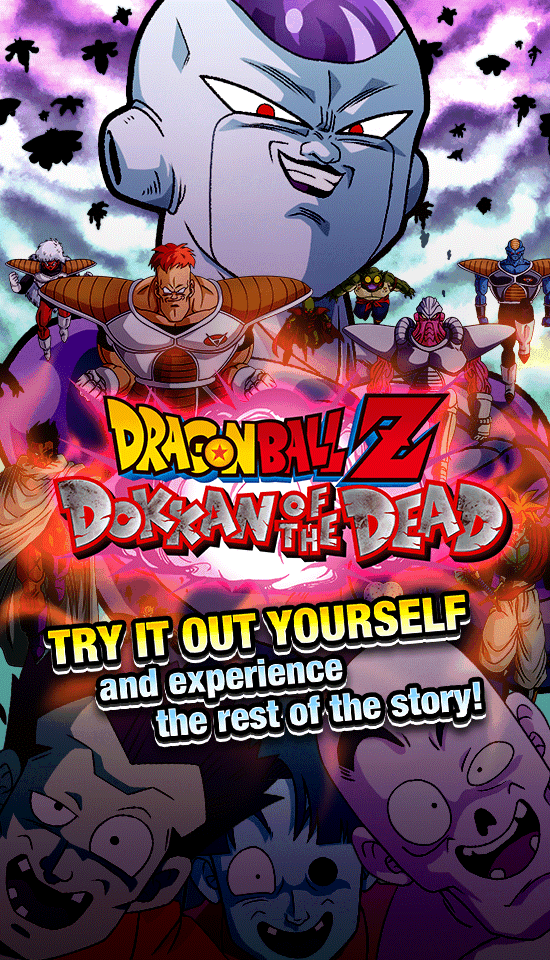 Check out the result of the fight against Frieza and the truth behind the mysterious revival of the dead in the upcoming mode "Dokkan of the Dead"!
Stay tuned for this exciting first-person shooting mode!
* Caution: Event Times in Dokkan Battle are listed in Pacific Standard Time (PST) instead of Pacific Daylight Time (PDT).
* Please note that the feature to be implemented is subject to change without prior warning.
We hope you continue to enjoy playing Dragon Ball Z Dokkan Battle, and stay tuned for Dokkan of the Dead!
PayPal Donation Donate Bitcoin